A very special Duke of Edinburgh connection with Teesdale family

On 25th April 2021, TCR Hub DoE participant Kirsty McLachlan will complete her Gold Duke of Edinburgh’s award, fulfilling a promise her parents made to Prince Philip many years ago.

Kirsty’s parents met through the DoE programme aged 16 & 19 at the Gladstone Street centre in Darlington and both achieved their Gold awards.  Kirsty’s Dad Robin then joined the Royal Logistic Corps and, in his spare time, became the leader of a DoE group in Farnborough.  Due to a deployment the couple brought forward their wedding, with their short honeymoon in Edinburgh including a trip to Holyrood Palace to collect Jillian’s Gold award certificate – as shown in the photo of Jill and Robin above.  On hearing they were on honeymoon  Prince Philip spoke to the pair and made them promise if they had children they would also do the Duke of Edinburgh’s Award.

Their daughter, Kirsty’s elder sister Heather achieved her Gold in 2019.  Due to her hypomobility, expeditions proved challenging, and Heather didn’t think she would be able to complete the task, but was then offered the opportunity to complete her expedition on water, sailing tall ships in Cornwall.

Their younger daughter Kirsty also faced challenges when Covid loomed, threatening to derail her progress.  However, the TCR Hub staff and volunteers overcame this hurdle and managed to get not one, but two groups out in the short period between lockdowns, with successful expeditions completed in the Lake District.

Sadly, Kirsty’s Dad passed away and will not get to see her collect her award,  but doing the award has helped her feel closer to her Dad and has been a way of honouring his memory. 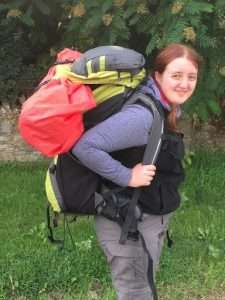 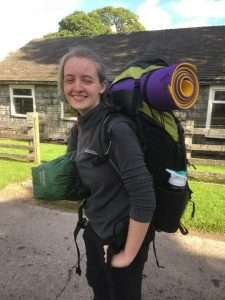 In achieving her Gold Award Kirsty has gained music grades,  taught ukulele at the TCR Hub, filmed a documentary and performed with the Virtual Youth orchestra, studied jazz dancing & musical theatre and volunteered with Oxfam.   She has enjoyed a variety of experiences, learn new skills and met some amazing people.